If you’ve never heard his name, you’ve probably at least heard his voice before. George Clinton is a music legend and the creative force behind Parliament-Funkadelic.

“Motown mixed with our own psychedelic cult thing,” was how Clinton once described the P-funk.

While the majority of this article will focus on George Clinton’s contributions to rap music, it is worthy to mention that George Clinton produced the second studio album by the Red Hot Chilli Peppers, Freaky Styley. So George Clinton has touched the worlds of rock music, r&b, funk, and rap music.

90’s west coast artists like Ice Cube featured George Clinton in their work. The song “Bop Gun” is a particularly standout track. Not only does Ice Cube sample Funkadelic’s “One Nation Under a Groove” — but George Clinton also got on as a vocalist and was featured in the video.

The term Bop Gun itself was invented by George Clinton, as part of Parliament, on the 1977 song “Bop Gun (Endangered Species)”. To hit someone with the Bop Gun is to fill their heart with the funk — an enlightenment of sorts.

George Clinton was also one of the reasons for Gangsta-Funk or G-Funk as Parliament-Funkadelic was extensively sampled to make those records. Gangsta Funk, commonly known as G-funk follows his lineage of sounds. 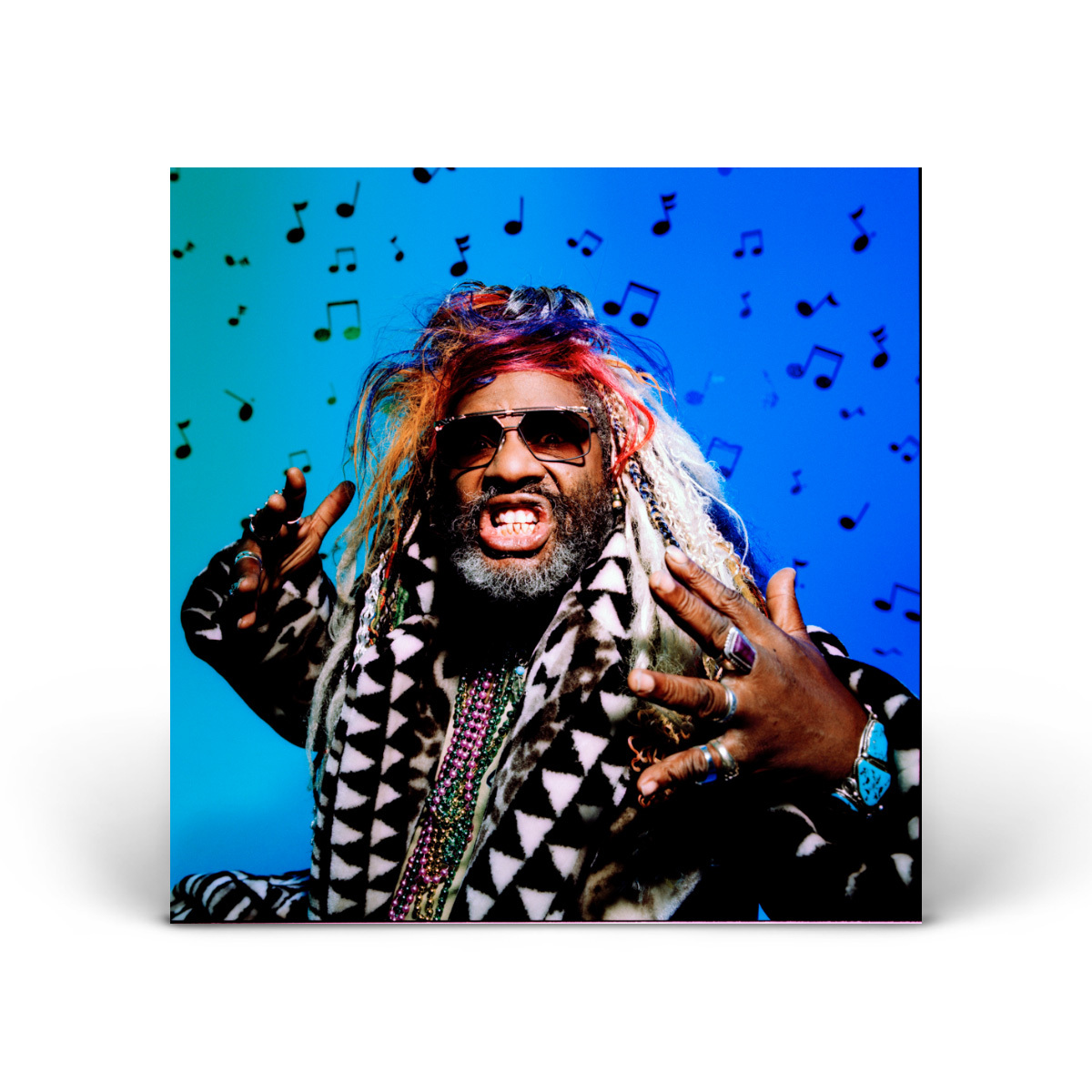 The world’s introduction to Snoop Dogg “Who am I (What’s my Name)?” samples George Clinton’s “Atomic Dog” as does Dr.Dre’s classic diss to Eazy-E “Fuck with Dre Day”. But what people may not know is that Q-Tip sampled the drums of Parliament’s “Come in Out of the Rain” for Nas’ “One Love” off of Illmatic.

Beyond the samples, Clinton set a precedent for hip hop records to issue out anti-establishment and political commentary. On Funkentelechy vs. the Placebo Syndrome, Clinton warns the listener of an alleged placebo syndrome. A metaphor for consumerism.

He also helped start the afrofuturism movement. Influenced by Star Trek, Clinton used his love of sci-fi to comment on the black experience, coupling Black Power and science fiction narratives.

Throughout the years Clinton would continue his social commentary. On R&B Skeletons, Clinton addresses the whitewashing of black music. The record takes aim at James Brown and few of his other contemporaries for selling out to the white man.

Clinton has been lauded for his creativity that has continued to impress upon music decades after his initial success. In 1997, Clinton and his merry band of funky pranksters were inducted into the Rock and Roll Hall of Fame. An inspiration to rap pioneers, Clinton provided the auditory landscape that allowed records like Straight Outta Compton to come into the fore. His touch is very much felt within modern music.

Editor’s Note: This article has been updated to reflect the current allegations against Clinton. Originally written on April 18, 2019.

George Clinton has been accused of plying his former bandmate with drugs as reported by The Blast. It’s alleged that he would give bumps of cocaine in place of money causing financial and psychological distress to his band mates.

The widow of George “Bernie” Worrell Jr. has filed a lawsuit against him. She claims, “Clinton has a history of fraud, deceit, and delinquency when it comes to the performance of contracts that he has entered into on behalf of himself or his companies.”

“Apparently, Clinton did this despite many band members not wanting drugs and needing money to provide for their families. Drug use was encouraged and pushed by Clinton,” the widow claimed elsewhere in the suit.

Worrell’s estate is suing for an unspecified amount of damages.

Kanye West and the Floating Stage

Without Clinton there would be no floating Kanye stage. On the production side of the things, George Clinton was famous for building a life-sized spaceship called the mothership. Notoriously difficult to carry from city to city, Clinton would take the mothership and create elaborate stage shows. During a funk rendition of “Swing Low, Sweet Chariot”, the mothership  would come down in full pyrotechnics revealing Dr.Funkenstein, George Clinton’s alter ego.

Theatrics are just as part of Clinton’s legacy as the music was. Fittingly, the mothership is now an artifact being preserved in the Smithsonian in Washington, D.C.

Janelle Monáe and The Continuation of Afrofuturism

Continuing the tradition of afrofuturism themes in R&B is Janelle Monáe. Her first studio album, The ArchAndroid, took cues from Parliament-Funkadelic using space travel as an allegory. Subsequent albums, The Electric Lady and Dirty Computer presented similar themes. The Afrofuturism movement continues on and is a by-product of George Clinton’s legacy.

The Afrofuturism of Outkast

On the album ATLiens, Outkast discuss feelings of alienation and individualism through an Afrofuturistic lens, thanks to the precedent that folks like George Clinton and Sun Ra set before them.

Clinton and the gang had a brief stint in Toronto, Ontario, Canada where they recorded the often-forgot-about America Eats Its Young album. Apparently, P-funk had come to Canada after signing with a Toronto-based management company.

Taking respite from Detroit during 1973, about dozen members decided to move to Toronto. Some even found work. Clinton credits Toronto amongst one of the cities that changed him. The album America Eats Its Young was the beginning of a whole new recording process.

Parliament-Funkadelic initially got success due to their proximity to the Mo-Town scene. They wound up getting airplay on Windsor’s CKLW. Eventually, building an audience in London, Ontario; their audiences were mostly caucasian. They played the Centennial Hall in London, Ontario and built out from there.

“At the time Toronto was hotbed of r&b music at that time”, says Rob Bowman, ethnomusicology professor and music writer, in the radio documentary, Funk Getting Ready to Roll.

Inspired by the social climate and inclusivity of the Great White North, Canada gave Clinton and the gang a sense of belonging as a product of the 70s. Their groovy and open-minded approach to playing instruments freed musicians to play with abandon.

The documentary also mentions the role, Rob Scribner, their Canadian manager and how he got Parliament-Funkadelic to keep the band together and get organized.

For a better look at the Canadian connection, you can listen to the audio documentary, done by music journalist David Dacks produced for the CBC, Funk Getting Ready to Roll.

The overall impact of George Clinton on modern music cannot be denied. The man was the embodiment of cool in his heyday and has inspired swagger ever since.

Rappers taking a page out of his book built successful careers. Whether it was Ice Cube or Dr.Dre or Warren G, they took the swagger of a previous generation to show they were hip to the game. Funkadelic’s psychedelic funk rock and Parliament’s r&b trappings, made for a sphere of influence that has lasted decades. Some of rap’s most charismatic characters were inspired by him.

The elements of Afrofuturism in Outkast would not exist if George Clinton had not done it decades earlier. Snoop Dogg’s career is indebted to the G-Funk sound for which Clinton was the main source of inspiration.

Inspired by the cultural changes happening in the 70s, Clinton set forth a playbook for funk-inspired social commentary adopting the spirit of the hippie movement and applying it to what had once been regimented and overly-structured music. This creative freedom has allowed artists such as Kanye, Outkast, Janelle Monae, and Dr.Dre to flourish. George Clinton really did see the future.

For at look at Clinton’s influence, listen below: